Presenting EGM in a patient with known atrial arrhythmias

A 68 year old male with a history of Mitral valve replacement, atrial arrhythmias and dual chamber pacemaker implantation for intermittent AV block attended a routine device clinic. He reported a 2 week history of palpitations and breathlessness on exertion.  Figure 1 shows the presenting EGM recorded on initial interrogation. The device settings are displayed below. 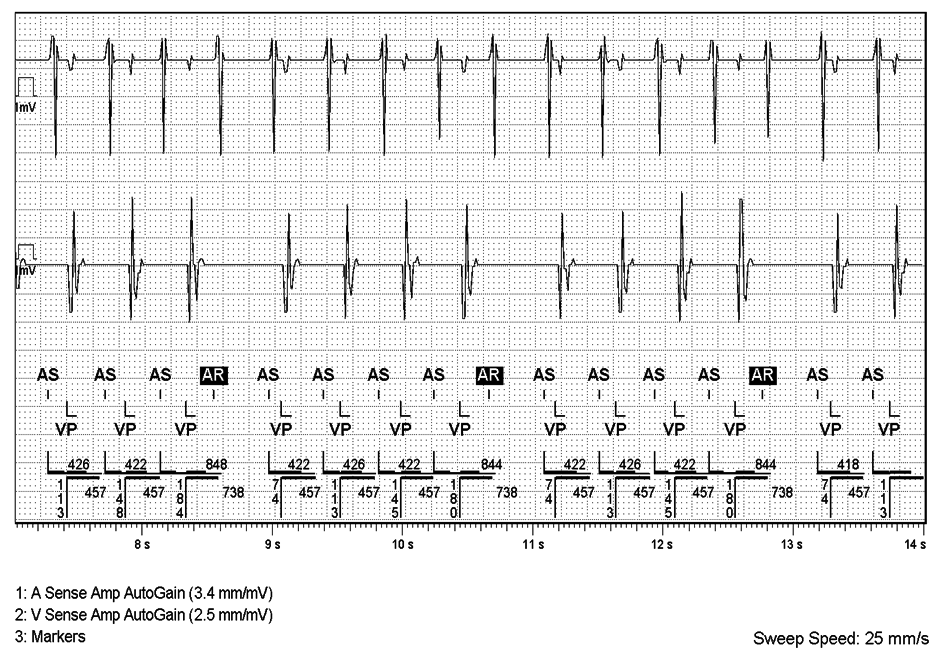 What is observed in the trace?

The EGM displays pacemaker upper rate behaviour in the form of a Wenckebach response which is normal pacemaker function. The Wenckebach response is observed in a 5:4 pattern (5 atrial events to 4 ventricular events). It is recognised by finding group beating, progressive lengthening of the AV interval and intermittent pauses on the trace.

In this case the atrial activity was related to a paroxysmal atrial tachycardia. The mode was reprogrammed to DDIR and the patient started on a new antiarrhythmic medication. A plan was made to review the patient in the device clinic in 6 weeks to assess arrhythmia burden, symptoms and device settings and depending on findings to considered referral for catheter ablation.