A 34 year old male with a history of congenitally corrected transposition of the great arteries (ccTGA) had a dual chamber pacemaker implanted for complete heart block (CHB) in 2012.  Since implant pacemaker follow-ups have been unremarkable. The underlying rhythm has been consistently reported as complete heart block (CHB) with a junctional escape rhythm.  The most recent follow-up showed 27 mode switch (MS) episodes with no recorded electrograms (EGMs) available for review.  When performing routine testing to assess for an underlying rhythm the episode below occurred and was stored. 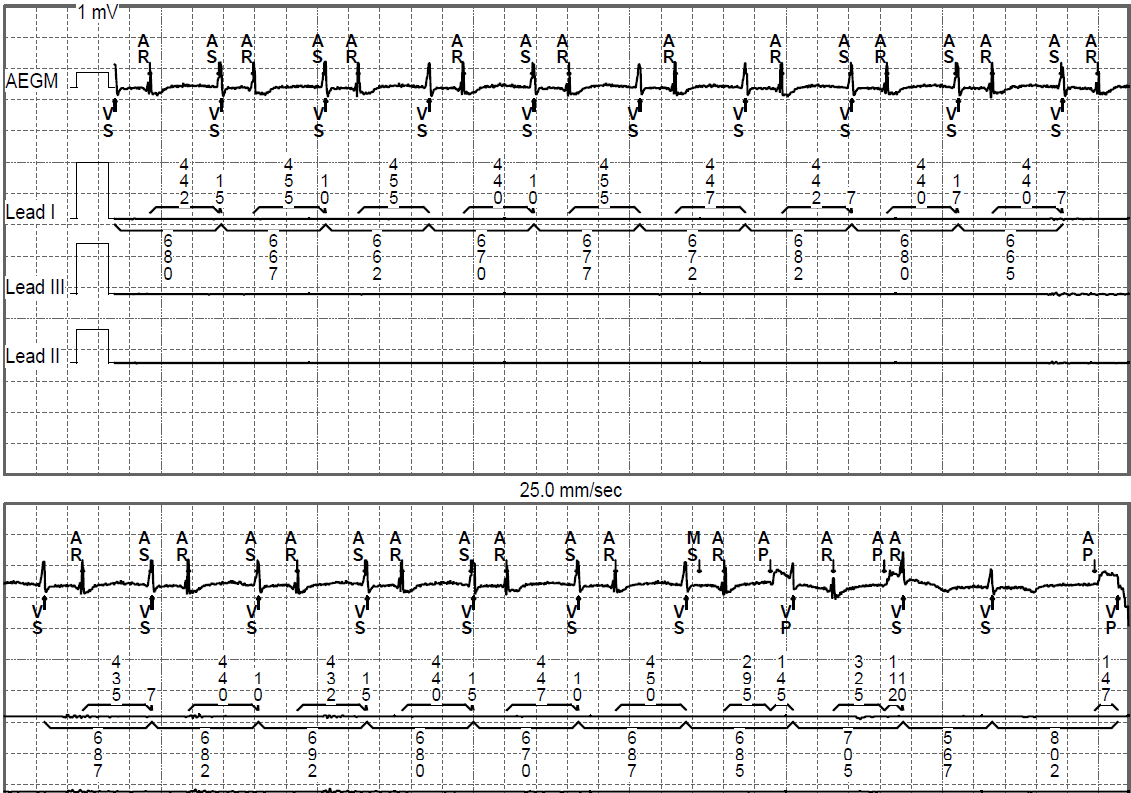 a) What does the electrogram show?

The rhythm is a junctional rhythm with FFRW oversensing on the atrial channel.

The atrial sense (AS) markers circled in red occur ~ 10ms prior to the ventricular sense (VS) markers indicating either a far field signal or simultaneous activation of A and V.  The atrial refractory (AR) markers circled in blue correspond to a second atrial signal which can clearly be seen on the electrogram.  The second atrial signal (AR) occurs too soon after the (AS) marker to be a true physiological signal IF the (AS) signal is truly atrial depolarisation.  This signal is marked (AR) as it occurs within the post ventricular atrial refractory period (PVARP).  In the context of a known junctional rhythm the most likely scenario is a junctional rhythm with FFRW oversensing as the far field signal occurs slightly before the (VS) occurs.  Eventually this leads to a sufficient number of atrial events triggering an mode switch (MS) episode, marked in yellow.

b) What programming changes would you make?

Changes to the atrial sensitivity would be unlikely to eliminate the FFRW oversensing as both signals appear to be of roughly equal amplitude.  Decreasing the sensitivity so as to exclude the FFRW would almost certainly lead to undersensing of true P waves.  A switch to VVI mode would prevent all atrial sensing and therefore avoid triggering of inappropriate MS episodes, but would leave the patient with permanent AV dysynchrony, even if the ventricular rate remained acceptable.  Encouraging AV sequential pacing is therefore the most likely change to benefit the patient which could be achieved by any of the options in the answer.  This would increase the percentage of atrial pacing where an atrial paced event would be followed by an appropriate AV delay and ventricular activation, maintaining AV synchrony.

Congenitally corrected Transposition of the Great Arteries (ccTGA – previously known as L-TGA) is a rare congenital heart malformation affecting 0.4-0.6% of those born with congenital heart disease (CHD) [1].  In ccTGA the flow of blood through the pulmonary and systemic circulations is essentially normal, however a ‘switching’ of the ventricles has occurred such that the right atrium directs deoxygenated blood from the systemic venous system to the ‘morphological’ left ventricle, which exits to the pulmonary artery and then to the lungs.  Oxygenated blood from the lungs enters the left atrium via the pulmonary veins as normal but then enters the ‘morphological’ right ventricle and then to the systemic circulation via the aorta.  As the problem occurs during the development of the structures separating the great vessels and the ventricles, other congenital malformations may be associated with ccTGA, most notably ventricular septal defects (VSD), pulmonary stenosis and Ebsteins anomaly of the tricuspid valve, although not in this specific case.

With or without the presence of VSD, ccTGA is associated with a high occurrence of AV block due to the abnormal development of the septal structures within which the AV node exists. It is noted however that junctional rhythms in these patients are often extremely robust and exhibit some level of sympathetic input manifested by increases in junctional rate in line with exertion and other stimuli.  This is rarely seen in the traditional ‘escape’ rhythms associated with pure conduction system fibrosis.

The literature reports occurrence of CHB in ccTGA patients of up to 30% [2].  Further rhythm disturbances are also common with ventricular arrhythmias and risk of sudden death requiring many patients to undergo implantation of ICD or CRT devices secondary to increasing failure of the systemic right ventricle as well as scar related VT following any surgeries or repairs that may have occurred.  Maintenance of AV synchrony by encouraging atrial pacing (as in this case) may be necessary in order to optimise cardiac output and minimise the negative haemodynamic effects associated with any concomitant valvular problems.

CHD takes many forms and often patients are at increased risk of developing brady- and tachy-arrhythmias.  Some knowledge of CHD and its associated features may be useful when programming and troubleshooting CRM devices for patients with CHD.