A 60 year old patient with a history of sick sinus syndrome implanted with a DDD pacemaker had a routine 12 lead ECG post implant.  The 12 lead ECG is displayed in figure 1. The device settings are as follows. 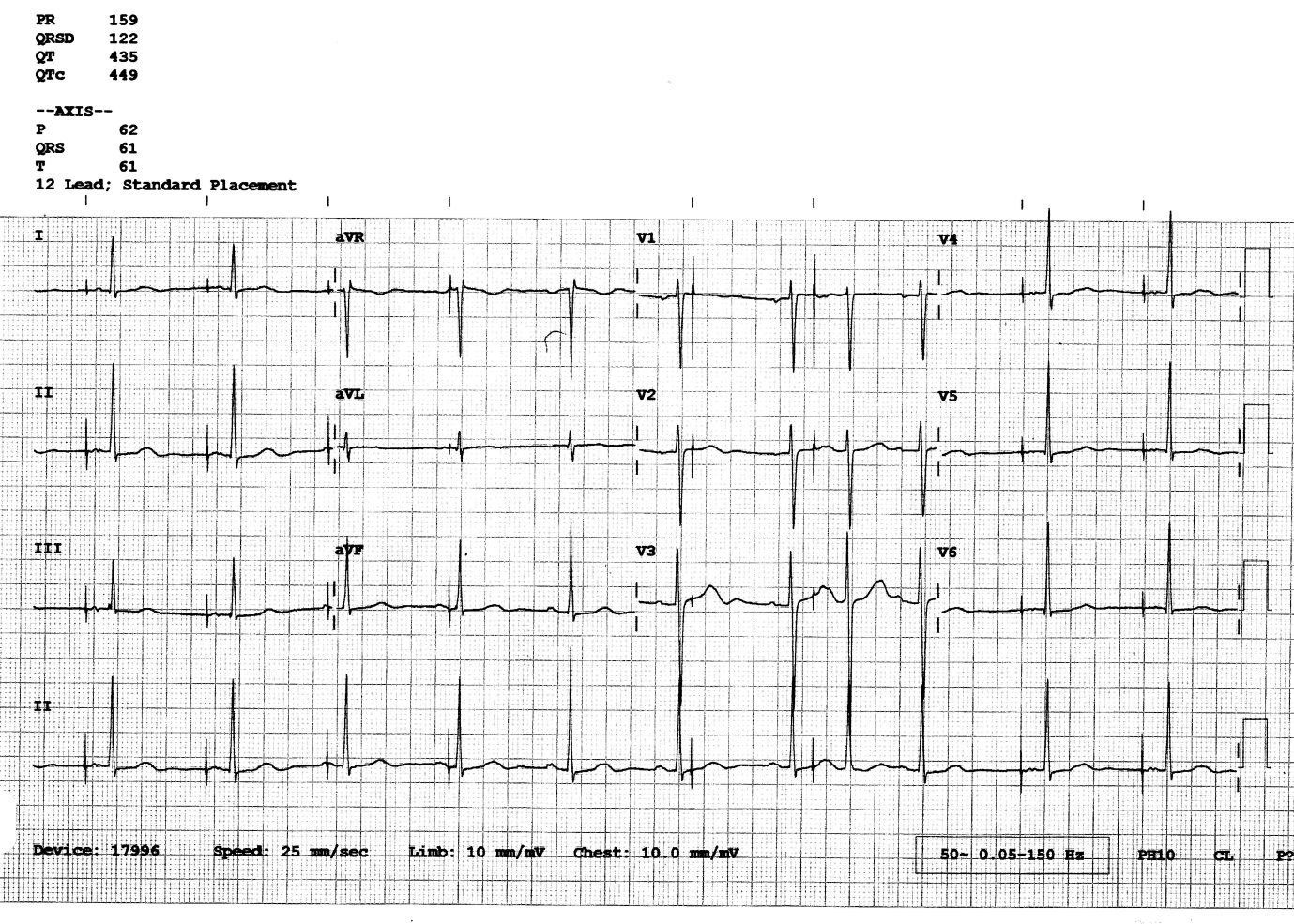 What does the ECG display?

Atrial capture is present
The ECG shows evidence of atrial capture with paced P waves present after pacing spikes seen with a bifid (notched) appearance compared to the rounder normal looking P waves seen from sinus activity. Pacing spikes which capture the atrium are shown in figure 2 below marked by blue stars.

There is intermittent atrial undersensing.
The majority of intrinsic P waves are undersensed marked in figure 3 with the blue dots.  There is one intrinsic P wave which is correctly sensed which inhibits the next expected atrial pacing stimulus.  This is confirmed by looking at the timing of the next pacing stimulus which is delivered 1000 ms after the sensed P wave.

There is AAI mode operation.
Marching out the atrial pacing spikes there is an attempt at atrial pacing at the lower rate interval throughout the majority of the trace.  There is good AV conduction present and with the indication for pacemaker implant being sick sinus syndrome it is likely that the pacemaker is working in AAI mode operation.  AAI mode operation can be confirmed, by looking at the 7th pacing stimulus delivered in the T wave of the preceding beat which manages to capture the atrium (circled). Due to the short coupling interval of the captured beat the atrial depolarisation travels to the ventricle with slower AV conduction (a PR interval of approximately 220 ms). If DDD mode operation was present the atrial pace would have triggered an AV interval which would have timed out at 200ms (the programmed paced AV delay) and a ventricular paced beat would be expected prior to the intrinsic R wave, which is not present, confirming AAI mode operation.

Figure 4
The 12 lead ECG with atrial pacing at the lower rate of 60 bpm (1000ms) marked on the trace. The 7th stimulus (circled) captures the atrium and conducts to the ventricle with an increased PR interval.

There is functional loss of atrial capture
Although not in the list of possible answers, as well as displaying atrial capture the ECG also shows functional loss of atrial capture marked in figure 5 by the blue boxes.  Atrial pacing spikes 3, 4 and 6 do not generate a paced P wave.  This is not due to suboptimal pacing outputs and cannot be corrected through programming but is caused by pacing stimulus being delivered at a time that the atrium is in refractory having already been depolarised by the intrinsic sinus P wave.  On the 7th beat (circled in figure 4) there is atrial capture. This is because the interval from the preceding intrinsic P wave is long enough that the atrial tissue is no longer refractory, allowing atrial capture.

Figure 5
Lead II rhythm strip from the 12 lead ECG. Blue boxes highlight atrial pacing spikes which do not capture the atrium due to functional loss of atrial capture

Programming changes
In this case, device interrogation revealed that the intrinsic P wave measured 1.4 mV which had reduced slightly since implant.  The programmed atrial sensitivity threshold had been set to the nominal setting of 1.0 mV which was resulting in intermittent atrial undersensing.  The atrial sensitivity setting was reduced (sensitivity increased) to a more appropriate value of 0.6 mV resulting in appropriate sensing. NB. Usually sensing should be programmed to a value which is less than 50% of the sensed P wave.

A chest X-ray confirmed no obvious A lead displacement. All other atrial and all ventricular lead measurements were within a normal range. A plan was made to review pacemaker function and atrial sensing at the 4-6-week post implant pacemaker check. Subsequent checks have shown normal device operation.