A 75-year-old woman with a background of ischaemic heart disease with severely impaired left ventricular function (LVEF 25%), 1st degree AV Block (PR 280ms) and left bundle branch block (QRS 150ms) presented to the emergency department with chest tightness and dyspnoea. She also reported symptoms suggestive of a urinary tract infection and a gastrointestinal bleed in the past few days. The patient was known to have a primary prevention CRTD device inserted 3 years ago. The report of her last routine CRTD check prior to the acute presentation stated a normal device function with stable lead measurements and 99% biventricular pacing.

Upon arrival her heart rate was 56bpm, non-invasive blood pressure 171/95mmHg and 94% oxygen saturation on room air. An urgently performed 12-lead ECG is shown in Figure 1 (note sequential acquisition of limb and precordial leads recording a total of 9 beats, sweep speed 25mm/s). Figure 2 shows the acute ECG in comparison with biventricular paced ECGs prior to the acute admission as well as a historic ECG prior to CRT insertion.

Device settings, comorbidities and medications are detailed below. 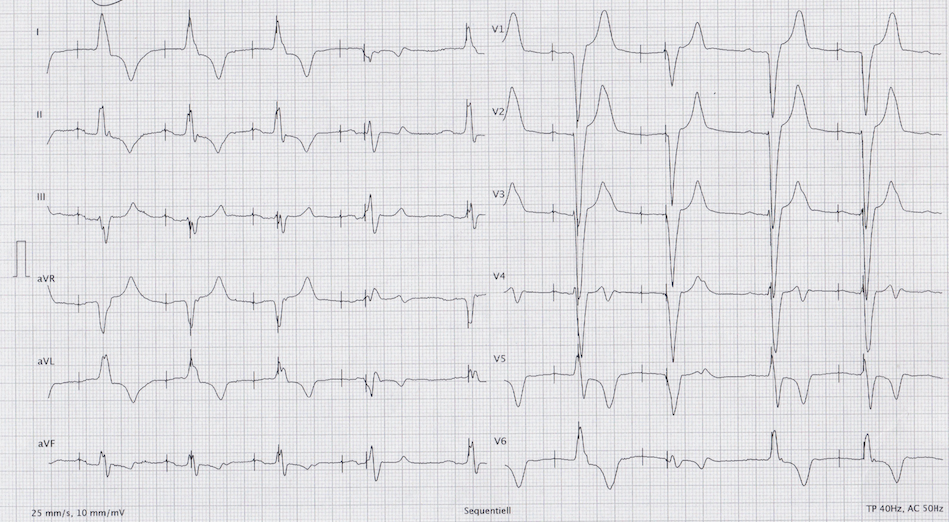 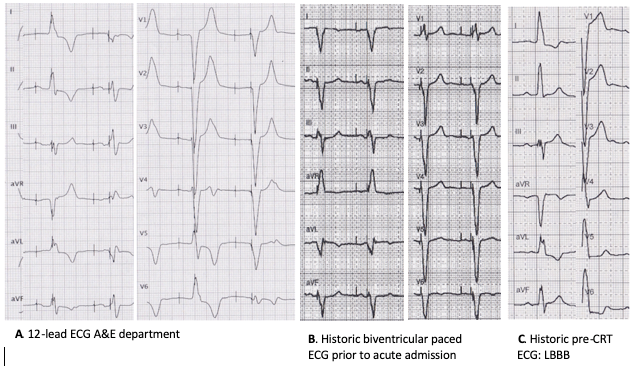 Which phenomena can be observed in this ECG?

P waves: A sinus P wave morphology is seen in the 5th and 8th beat. The 1st, 2nd, 3rd and 6th beat have a pacing spike on top of the P-wave 40-50ms after its start without convincing contribution to the atrial activation possibly representing pseudo-fusion (A). In the 4th beat the pacing spike preceded the P-wave by 40-60ms with discreet changes in morphology compared to the sinus beats, fusion (B). In the 7th beat a pacing spike without a following P-wave and no preceding intrinsic P wave indicated true loss of capture (D) (Figure 3)

QRS complexes: QRS complexes were significantly broadened with left bundle branch block like morphology with deep T Wave inversion in lead I, II, aVF, aVL and V5-6. A pacing spike in the P wave of the first beat was noted but not directly preceding the QRS therefore likely representing P wave under-sensing with subsequent atrial pacing and intrinsic ventricular activation. In the 2nd, 3rd, 6th, 8th, 9th beat pacing spikes are seen buried within the QRS. The similar morphology to the first QRS was suspicious for pseudo-fusion in the first instance though discreet changes in the terminal portion and the amplitude of the 2nd and 3rd QRS hinted to fusion. In the 4th, 5th, 7th QRS the pacing spike coincided with the beginning of the QRS and was associated with clear changes of QRS morphology consistent with definite fusion.

The patient was diagnosed with severe hyperkalemia, with a potassium of 8.6mmol/l in the context of acute-on-chronic kidney insufficiency likely precipitated by a urinary tract infection, suspected gastroenterological bleed and concomitant treatment with a mineralcorticoid receptor antagonist, angiotensin receptor-neprilysin inhibitor and metformin. The patient was urgently treated with intravenous calcium gluconate 10% for membrane stabilization as well as Insulin-Glucose Infusion and nebulised Salbutamol for redistribution. Aldactone, Sacubitril-Valsartan and Metformin were hold. A repeat potassium measurement showed successful reduction to 6mmol/l and a follow up ECG three hours later confirmed appropriate atrial and ventricular capture and reversal of the T Wave inversion (Figure 4).

Given the urgency for potassium-lowering interventions the device check was performed only after reduction of potassium levels. At that time demonstrating overall normal device function with unremarkable pacing thresholds and sensing. 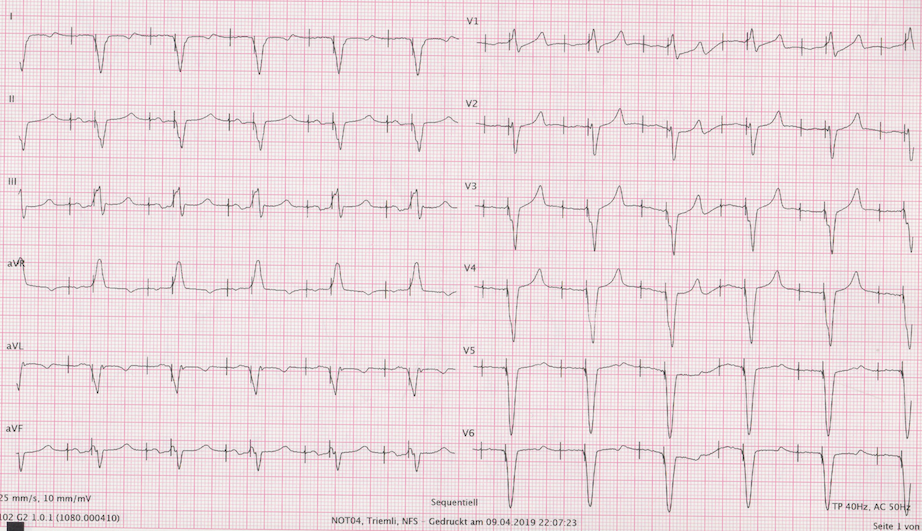 Cardiac resynchronisation therapy is associated with improved symptom status, ventricular reverse remodelling and mortality in selected heart failure patients. Response depends among others on the ability to deliver close to 100% biventricular pacing.  The 12-lead ECG is not only essential in the selection of CRT candidates but it is equally important in identifying loss of biventricular pacing and the underlying cause and should be part of the routine assessment of every CRT patient. Physicians involved in the care of CRT patients need to be familiar with QRS morphology patterns during pacing and recognise phenomena of loss of capture, fusion, pseudo-fusion and anodal capture as well as the effects of metabolic disturbances on device therapy.

Biventricular-paced QRS morphology depends on multiple factors including LV and RV lead position, programmed AV and VV delays as well as presence of scars or interventricular conduction delays. Usually, successful LV capture is demonstrated by R/S >1 in lead V1 and/or R/S <1 in lead I.2

Assessment of paced QRS morphology is of particular importance in patients with extended bipolar LV pacing vector (LV à RV coil or ring). If the surface ECG is consistent with RV pacing only, anodal capture should be suspected. The latter represents the unintentional capture of the RV lead (anode) despite attempted pacing of the LV lead (cathode).3

The phenomenon termed “fusion” occurs when a pacing stimulus collides with an intrinsic impulse and both contribute to the myocardial depolarisation resulting in a fused morphology on the surface ECG. In certain CRT patients this may be intentional as it has been associated with improved cardiac remodelling.4 “Pseudo-fusion” refers to a pacing spike falling on top of an intrinsic impulse without capture and no contribution to the depolarisation. The morphology is the one of an intrinsic beat only. “Pseudo-pseudo-fusion” (not shown on this ECG) would describe an atrial paced stimulus coinciding with an intrinsic QRS (rather than a ventricular stimulus).

Definite differentiation between intrinsic conduction, (unintentional) fusion, pseudo-fusion or loss of capture based on surface ECG alone might not always be possible given the complex non-linear interaction between multiple factors influencing intrinsic morphology, pacing thresholds and conduction delays.

If the clinical situation allows, a device check should be performed to review pacing thresholds, sensing, programming settings, battery life and arrhythmia burden (atrial arrhythmias and ventricular ectopy). Drug interactions need to be considered as well. For certain medication including a number of anti-arrhythmic drugs an increase in pacing thresholds has been described.5 Also intrinsic causes interfering with successful CRT delivery should be investigated, most importantly severe metabolic changes (hyperkalaemia, marked acidosis or alkalosis, profound hypothyroidism) or acute myocardial ischaemia.

Effect of hyperkalaemia on the ECG and cardiac device therapy

ECG changes in hyperkalaemia have been extensively described. They include decreased or absent P waves, progressive widening and deformation of QRS, peaked T-waves, brady arrhythmias and in severe cases development of sine wave pattern and ultimately asystole6. In device patients’ hyperkalaemia increases pacing thresholds, exaggerates latency between pacing stimulus and onset of myocardial depolarisation (also known as “first degree pacemaker exit block”) which may progress to higher degrees of exit blocks and eventually loss of capture.

Atrial myocardium is known to be more sensitive to hyperkalaemia with atrial loss of capture often preceding the ventricle. Oversensing of distorted QRS or T waves or under-sensing due to depressed slew rates of the intracardiac electrogram may also be observed and in worst case can lead to dangerous proarrhythmogenic pacing in the vulnerable phase of repolarisation (R-on-T).7

In this case the first 12-lead ECG (Figure 1) exemplifies these changes by demonstrating evidence of atrial and ventricular undersensing and exaggerated latency leading to events of pseudo-fusion and fusion. True loss of capture is at least demonstrated for the atrial level. The causal relationship to the hyperkalaemia is indirectly confirmed by resumption of appropriate sensing and capture after successful potassium reduction (Figure 4).