Oversensing shortly after an ICD implant

A 77 year old male with a history of coronary heart disease, ischemic cardiomyopathy and aborted sudden death from a ventricular arrhythmia underwent implantation of a dual chamber implantable cardiac defibrillator (ICD).  An active bipolar atrial lead and an active dual coil DF4 right ventricular integrated bipolar defibrillator lead were implanted to the right atrial appendage and right ventricular apex respectively. There were normal intracardiac electrograms and satisfactory parameters during lead tests and immediately post connection to the generator.  Three therapy zones were programmed with rate cut offs of 220/180/150 bpm. Brady settings are displayed below.  Approximately 40 minutes post procedure the device was interrogated for a routine post implant check. The presenting rhythm strip is displayed below. Of note all lead measurements were within a normal range.

What is the most likely explanation for the discrete low frequency potentials seen on the RV EGM?

Explanation
The trace in figure 1 displays an atrial paced ventricular sensed (AP/VS) rhythm. Atrial pacing is occurring at the programmed lower rate limit of 55 bpm and there is clearly good AV conduction. The atrial and shock EGMs are unremarkable. The RV EGM however displays intermittent random oversensing with four unexpected potentials seen.  The 3rd potential is marked as a VS event resulting in the next VS event (an intrinsic R wave) falling in the lower VT therapy rate zone and marked as a VT-1 event (figure 2). 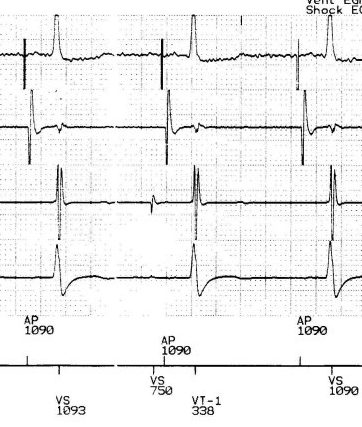 Figure 2
Oversensed potential marked as VS causing the next ventricular event (the intrinsic R wave) to fall in the  VT-1 rate window.

Reviewing the most likely explanation from the answers available; the discrete potentials do not share a relationship with and are not associated with the ECG P and T waves ruling out P wave and T wave oversensing.  The signals are seen to occur randomly before atrial pacing and after the intrinsic R wave, ruling out afterpotentials.  A loose set screw is unlikely as lead measurements are within normal range and there are no make break type signals present.  This leaves the most likely explanation of oversensing to be air escaping from the sealing plugs.

Discussion
Air escaping from the set screw sealing plug is a rare mechanism of intermittent ventricular oversensing.  It has been reported to occur when there is microscopic damage to the seal plug, caused by insertion of the torque wrench when preparing to screw the lead into the device header [1,2]. Air which remains in the connector cavity or lead lumen after the lead has been screwed into the header is able to escape through the damaged seal plug. Escaping air bubbles create the signals displayed in the trace which cause intermittent oversensing.  Once all air has dissipated which occurs within 1-2 days, no further signals are produced and oversensing ceases.

This mechanism should be considered if oversensing occurs within the first few days post implant, if lead measurements are within a normal range, signals cannot be explained by any physiological cardiac event on the ECG or respiration or skeletal muscle contractions.   Of note, it is believed that proper torque wrench technique is important in avoiding this unusual cause of oversensing. For more information, the references below are worth reading which describe this mechanism in more detail in a patient with a DF-1 lead [1] and in two patients with DF-4 leads [2].