A 68 year old patient with a history of brady-tachy syndrome and implanted with a DDD pacemaker presented with palpitations.  A device interrogation was requested after telemetry monitoring showed ventricular pacing at 100 bpm with the patient at rest.  The pacemaker was interrogated and the presenting EGM is shown in figure 1. The device settings are displayed below. 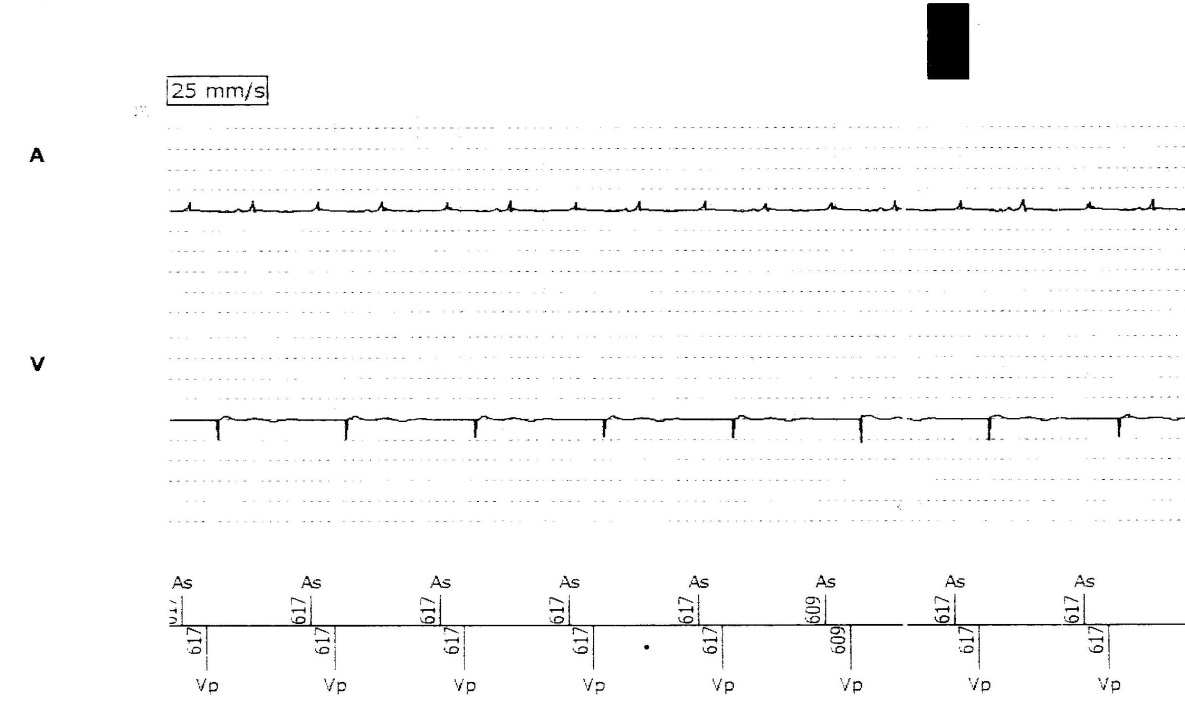 From the options below having seen this EGM what programming change would you make?

The EGM shows a regular atrial tachycardia with a cycle length of 312 ms (192 bpm). Sensed atrial events (AS) trigger an AV interval followed by ventricular pacing (VP), with a ventricular pacing rate of 97 bpm.  Every 2nd atrial event falls in the post ventricular atrial blanking period (PVAB), in this instance occurring just inside or at the programmed interval of 150 ms.  These events are blanked/not sensed by the pacemaker resulting in failure to mode switch (MS).

This EGM is often described as ‘2:1 lock in phenomenon’ where there is 2:1 tracking of an atrial arrhythmia (most commonly atrial flutter) and failure to mode switch due to a mismatch in pacemaker timing intervals and the atrial rate.

From the options above the correct programming change would be to shorten the PVAB period allowing for the 2nd atrial event to fall in the post ventricular atrial refractory period (PVARP) and count towards the MS trigger.  Changing the atrial sensitivity would have no effect in this scenario as it is pacemaker timing intervals not sensitivity causing the problem. Rate adaptive pacing and changing the maximal tracking rate are also not relevant to this tracing.

Of note shortening the PVAB may increase the risk of oversensing far field R waves (FFRW).  If no changes are made, pacing at approximately 100 bpm for a prolonged period of time could result in tachycardia induced cardiomyopathy and for this patient contributed to the patient’s symptoms of palpitations.

In some pacemakers’ specific algorithms have been developed to prevent this incidence of failure to mode switch (e.g. Atrial flutter response, Blanked flutter search, 2:1 lock-in protection).  Other programming options available may include shortening the AV delay, lowering the MS rate threshold, reducing the maximal tracking rate or reprogramming the mode if other options fail, to a non-tracking mode such as DDI, VDI or VVI.