Background
A 70-year-old man was brought to A&E with paroxysmal bouts of broad complex tachycardia associated with palpitations and light-headedness. Episodes were frequent lasting 5-6 seconds and appeared to self-resolve briefly before re-initiating. His medical history included treatment for hypertension and implantation of a dual chamber pacemaker implanted six months previously for sick sinus syndrome. A 12-lead recorded during an episode capturing the onset of tachycardia is displayed in figure 1. Pacemaker settings are displayed below. 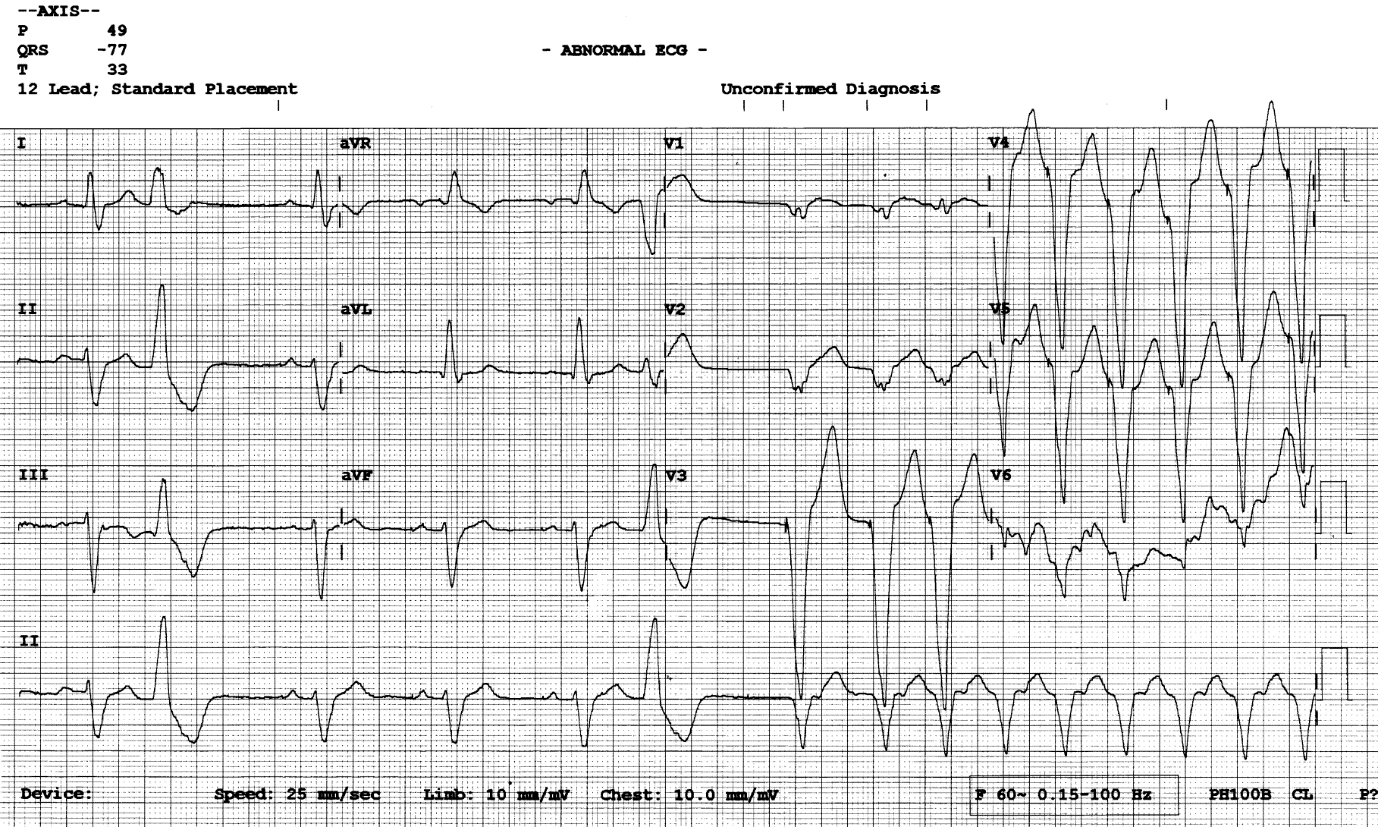 Figure 1
A 12 lead ECG recorded during an episode of palpitations associated with light-headedness.

What is causing the tachycardia episodes? 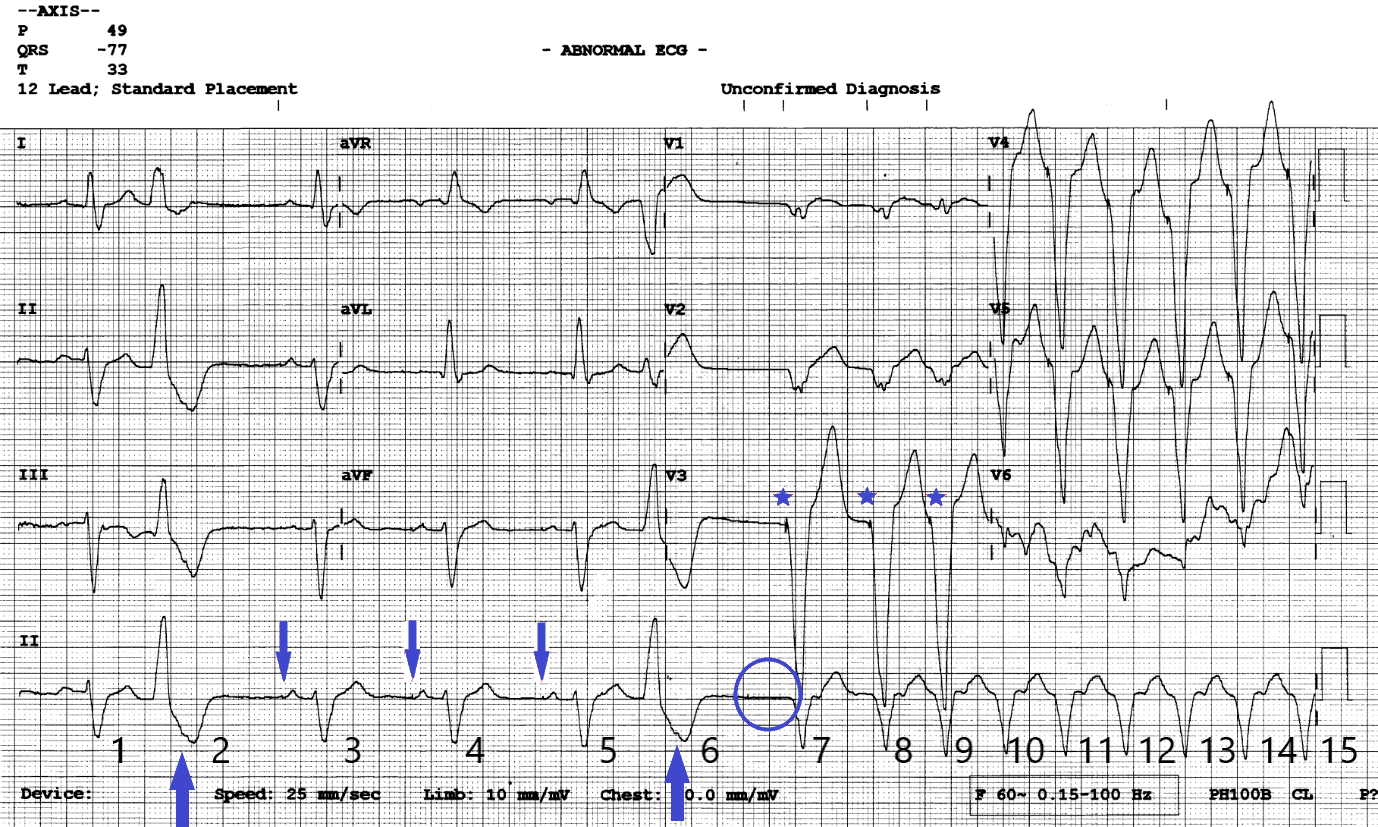 Explanation
The answer is pacemaker malfunction with the ECG capturing the onset of a pacemaker mediated tachycardia (PMT) triggered by loss of atrial capture. Non-sustained VT and SVT with BBB can be ruled out as broad complex beats have pacing spikes preceding each QRS (blue stars) indicating ventricular pacing. PVC’s set up the circumstance for PMT creating a compensatory pause and bringing in atrial pacing but are not directly responsible for the episodes. The episodes are not associated with physical activity and show sudden onset of paced tachycardia which is not typical for rate responsive pacing behaviour.

ECG Review
The ECG starts with (1) an atrial sensed ventricular sensed event (AS/VS). Note the round shaped sinus P wave and no pacing artefact preceding the P wave or QRS complex. The next event (2) is a PVC which has a subtle retrograde P wave (1st blue up arrow) within the ST segment. This suggests the presence of VA conduction however here the retrograde P wave falls in the post ventricular atrial refractory period (PVARP) and does not affect pacemaker timing intervals. The lower rate interval (60 bpm) times out and the next event (3) is an atrial paced beat which has good AV conduction (AP/VS). There is a subtle atrial pacing artefact (1st blue down arrow) preceding the P wave and a slightly peaked paced P wave morphology which is different to the previous sinus sensed P wave. The next two events (4&5) are AP/VS events at the lower rate interval of 60 bpm. Event (6) is another PVC. After this PVC the lower rate interval times out again, but this time there is no paced or sensed atrial event (blue circle). Event (7) is a ventricular paced (VP) complex with a clear pacing artefact preceding the QRS (1st blue star) which is followed by 8 further ventricular paced beats (8-15) occurring at the upper rate limits of 130 bpm.

Discussion
The sequence is typical of a pacemaker mediated tachycardia initiated by a loss of AV synchrony which in this case is due to loss of atrial capture. It is a rhythm which requires intact VA conduction and occurs when a ventricular paced event or PVC conducts back to the atria giving rise to a retrograde P wave which falls outside of the programmed PVARP. The retrograde P wave is sensed as an atrial event which triggers an AV interval. When the AV interval times out a ventricular paced beat is delivered and the sequence repeats until there is loss of atrial sensing, loss of retrograde conduction or a PMT prevention algorithm is activated.

In the acute setting a paced broad complex tachycardia at rest at the upper tracking rate most commonly 120/130 bpm should raise suspicion of a PMT. Other differentials include tracking of sinus or atrial tachycardia, inappropriate rate response behaviour, failure to mode switch or inappropriate programming of a device algorithm.

Use of a magnet can help as a short-term solution to alleviate patient symptoms and may help with differentiating between a PMT and tracking of sinus or atrial tachycardia. Magnet placement over a pacemaker triggers asynchronous DOO pacing (AP/VP) at the manufacture specific magnet rate (this will be less than the paced tachycardia rate). Asynchronous pacing deactivates the A and V sensing circuit and will terminate a PMT. On removal of the magnet if the tachycardia is due to a PMT, re-initiation may occur but often this is not immediate. If the tachycardia is due to tracking of sinus or atrial tachycardia removal of the magnet will result in a quick return to the pre magnet placement rate. Regardless of spot diagnosis organising a pacemaker device check for review and possible reprogramming is the best management in this situation.

In this instance, the arrhythmia responded to pacemaker reprogramming with two programming changes required. It was found that the atrial threshold had risen resulting in intermittent atrial loss of capture due to a suboptimal pacing output. This was corrected by increasing the pacing output to twice the threshold to maintain an appropriate safety margin. A second change was also made to the programmed PVARP. Retrograde conduction was measured by measuring VA intervals after VP and different heart rates. The PVARP was programmed to exceed the longest VA times measured. This results in retrograde P waves from ventricular pacing falling into the refractory period and hence not being tracked.