At a time when face to face meetings are scarce, we present an opportunity for trainees to meet virtually with experienced electrophysiologists outside your geographical area and develop long lasting connections. We are pleased to announce a Zoom mentoring event featuring six eminent consultant electrophysiologists from around the UK.

A mentoring session using the zoom platform will take place on Tuesday 29th of September 17:30 – 18:30. There will be a short panel discussion with the opportunity to ask questions of the full faculty. This will be followed by 2 x video 1:1 discussions with faculty members.

Find faculty member details and how to apply below. 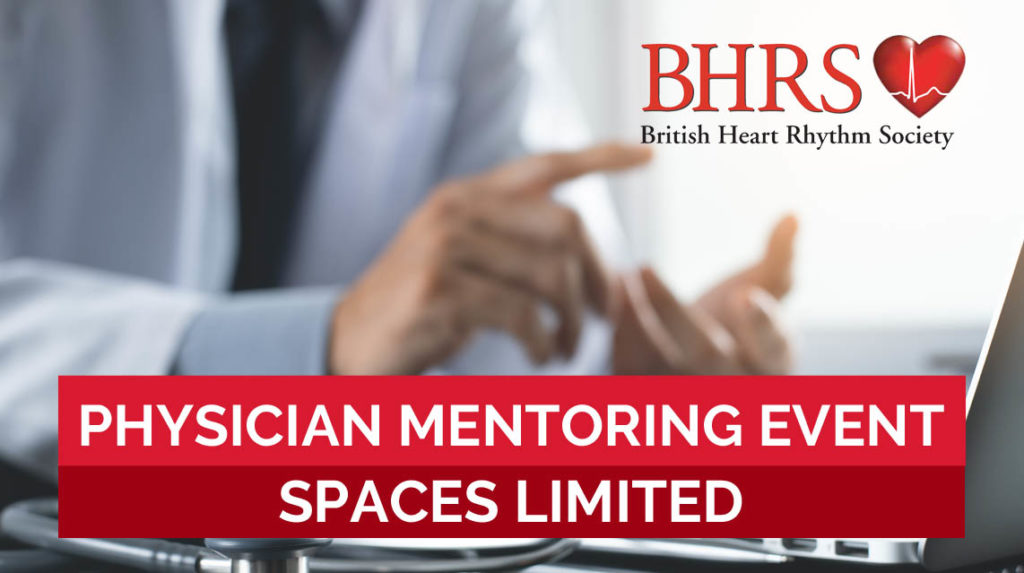 Note:  There are 6 spaces available.  We will allow 8 applications to allow for 2 back up spaces should they become available.

John Paisey qualified from (’97) and was awarded his DM in EP and Devices (’04) at University of Southampton before securing an NTN then did his EP and device training at Southampton and Oxford. He was first appointed Consultant in 2008 at Royal Bournemouth before moving back to Southampton in 2016. He is training program director for Wessex Cardiology, Curriculum lead for the SAC, a BHRS council member and divisional DME with particular responsibility for international medical graduates.

Manish was appointed Consultant at the Queen Elizabeth Hospital in 2018. Manish’s main focus is Clinical Electrophysiology, catheter ablation and he is also responsible for the Inherited Arrhythmia Syndromes in the Inherited Cardiac Conditions clinic. Manish is also the lead for the EP Fellowship program.

Manish graduated from Guy’s, King’s and St. Thomas’ School of Medicine in 2003. His internal medicine training was in London, followed by General Cardiology training in Cardiff. Manish was awarded a BHF Fellowship in 2011-14 in Oxford and was awarded my DPhil in 2016 for work on the autonomic modulation of ventricular arrhythmia. Manish was awarded the BHRS Young Investigator award in 2014 for this work. Manish then completed clinical training in Oxford and followed this with a fellowship at the Royal Melbourne Hospital under the guidance of Professor Jon Kalman.

Manish comments “I am very keen to support the next generation of UK trainees in their journey through electrophysiology, and I hope that this mentorship event becomes a real success story of HRC 2020”.

Kim Rajappan is a Consultant Cardiologist and Electrophysiologist at the John Radcliffe Hospital, part of the Oxford University Hospitals NHS Foundation Trust. He is involved in the investigation and treatment of patients with all forms of arrhythmia problems including ablation and device therapy. His research and clinical interests are focussed on catheter ablation of complex cardiac arrhythmias including atrial fibrillation and ventricular tachycardia. He is an active member of the British Heart Rhythm Society, an Executive Committee member of the Arrhythmia Alliance and Program Director for Heart Rhythm Congress, the largest national arrhythmia meeting in the UK. He has published over 90 peer reviewed papers, lectures nationally and internationally, and is one of the editors of the Oxford Handbook of Cardiac Electrophysiology and Catheter Ablation. He travels internationally to help teach Electrophysiologists in other countries new techniques in ablation, particularly advanced cardiac mapping of arrhythmias, and implantation of ICD/CRT devices. He is a Clinical and Educational Supervisor for the Thames Valley Deanery, sits on the local ARCP panels, and interviews for posts ranging from FY1 to Consultant positions.

Consultant Cardiologist and Electrophysiologist at The Bristol Heart Institute

Following undergraduate studies at Cambridge University Joseph completed Medical training at Oxford University. Joseph was a senior House officer at the Queens medical Centre in Nottingham and started Cardiology training on the Eastern Deanery rotation. Joseph undertook DPhil in Prof Channon’s laboratory in Oxford, investigating the cardiovascular consequences of exercise training and particularly the role of Nitric Oxide. Joseph then completed electrophysiology training in Oxford before undertaking a Fellowship at the Heart Hospital in London. Joseph was briefly a consultant at Papworth hospital in Cambridge before moving to the Queen Elizabeth Hospital in Birmingham. Joseph has an interest in all aspects of electrophysiology and have a subspecialty and research interest in arrhythmias in ACHD.

Note: There are 6 spaces available.
We will allow 8 applications to allow for 2 back up spaces should they become available.