Tachycardia during an Upgrade to CRT-P

A 68 year old male with a history of coronary artery bypass grafting, moderately impaired left ventricular systolic dysfunction and bradycardia requiring permanent dual chamber pacemaker implantation was referred to our centre for upgrade to a cardiac resynchronisation therapy pacemaker (CRT-P).  Over the last few months he had been complaining of increasing breathlessness on exertion and palpitations.  Interrogation of his device immediately pre implant showed a high ventricular pacing burden at 80%. Lead measurements were satisfactory and there was a good underlying rhythm of sinus bradycardia with occasional ventricular ectopy at 45 bpm.  The intrinsic rhythm was well tolerated and the pacemaker mode was reprogrammed to VVI with a base rate of 40 bpm.  Diathermy was made available at the operators request and the patient was set up in the usual fashion.  Shortly after starting the procedure the following ECG was observed. 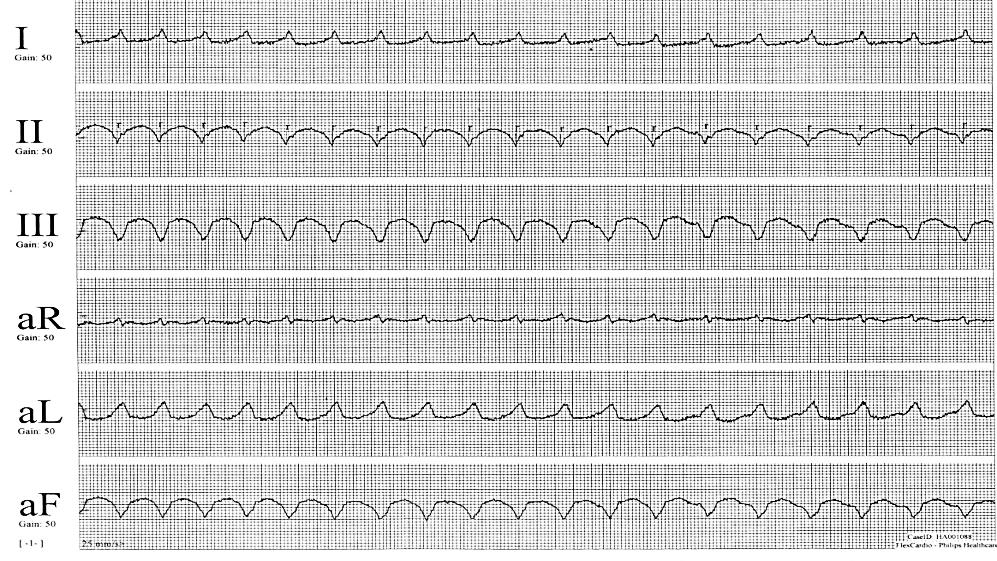 Explanation
At first glance the ECG rhythm looks to be a regular broad complex tachycardia. The rate across the 10 second strip is approximately 115 bpm.  There are no obvious pacing artefacts and no obvious P waves. There is left axis deviation and the inferior leads have a negative QRS which could indicate right ventricular (RV) apical pacing.  A closer inspection reveals that the rhythm is actually irregular. At the start of the recording the heart rate (HR) is faster than the HR at the end of the recording.  The first 4 R-R intervals have a rate of approximately 130 bpm, the next 8 R-R intervals a rate of approximately 120 bpm, the last 6 R-R intervals a rate of approximately 110 bpm. We can conclude the rhythm is slowing in progressive steps which points towards a pacemaker algorithm.  If programmed correctly as described to VVI with a base rate of 40 bpm, rate response and tracking of an atrial arrhythmia can be ruled out. This leaves a rate regularisation algorithm as the only possible answer.

Discussion
In the acute setting although pacing was in the differential when this ECG was seen the operator was informed that the rhythm was ventricular tachycardia (VT). The immediate thought towards VT was due to a history of palpitations, ischemic heart disease and ventricular ectopy seen during the initial pacemaker interrogation.  The procedure was paused and the patient assessed.  The patient was haemodynamically stable and after approximately 40 seconds the rhythm was seen to slow and return to sinus rhythm.  The procedure was restarted and the broad complex rhythm was seen to reoccur. However, this time it was noted to occur immediately after the use of diathermy and thoughts now turned towards a pacemaker related reason for the rhythm.

The pacemaker was re-interrogated to assess the programmed settings. The mode had been correctly set to VVI with a base rate of 40 bpm.  However, on reviewing all parameter settings it was noted that rate smoothing remained active and this was promptly turned off. Stored ventricular high rate (VHR) episodes confirmed that rate smoothing was behind the rhythm seen (Figure 2).

Rate smoothing had been activated due to ventricular over-sensing of the diathermy signals which prompted pacing initially at the upper rate (130 bpm), followed by a gradual slowing/step down in the pacing rate until the intrinsic rhythm was seen.  With rate smoothing turned off there were no further episodes of pacing induced tachycardia.  The procedure was completed successfully with the patient discharged the next day.

Rate smoothing and other rate regularisation algorithms are designed to prevent a sharp drop in heart rate.  The algorithm has historically been used to reduce symptoms of palpitations in patients with atrial fibrillation by preventing large variations in beat to beat heart rate.  The algorithm has also been used to eliminate the long pause that commonly occurs after a premature ventricular contraction (PVC) and is thought to help prevent pause dependent ventricular arrhythmias.

Across pacemaker manufacturers there is some variation in the mode of operation. The rate of pacing delivered post pause is often determined through a calculation using a programmable percentage or fixed interval. In brief most algorithms work by monitoring the patient’s beat to beat heart rate and evaluating averaged intervals prior to a spontaneous drop in rate.  When the drop in rate is detected the pacemaker takes over by pacing at a rate slightly slower than the calculated heart rate immediately prior to the pause. The pacing rate is then gradually reduced until the basic rate is reached or the spontaneous rhythm is restored.

Of note some manufacturer rate smoothing algorithms are automatically programmed on if an atrial arrhythmia prevention function is activated and require physically turning off, as was the case for this patient.

• When preparing a pacemaker prior to generator change or upgrade ensure rate smoothing or an equivalent rate regularisation algorithm is disabled particularly if diathermy is to be used.