Arrhythmia episodes recorded one day post subcutaneous ICD (S-ICD) implant.  What is the cause?

A 32-year-old male presented with an out of hospital cardiac arrest and underwent implantation of a secondary prevention subcutaneous implantable cardiac defibrillator (S-ICD). The implant procedure was performed under general anaesthetic and was uncomplicated, with the secondary sensing configuration (lead tip to can) selected by the automatic device set up. The system integrity was confirmed with a defibrillation threshold test. Ventricular fibrillation (VF), was successfully induced and treated appropriately with a single 65 joule shock, recording a satisfactory shock impedance.

The following day a post implant check was performed. The check revealed multiple stored ‘untreated’ arrhythmia episodes. An example of an episode is displayed in figure 1. The check also revealed some baseline wander in the secondary and alternate sensing vectors, but not in the primary vector (figure 2). Device settings are displayed below. 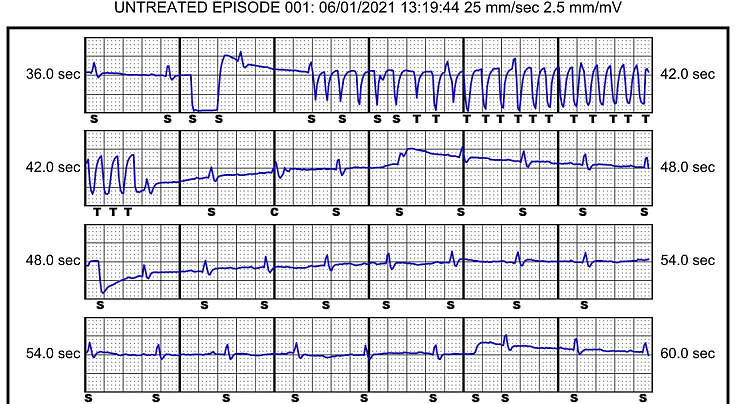 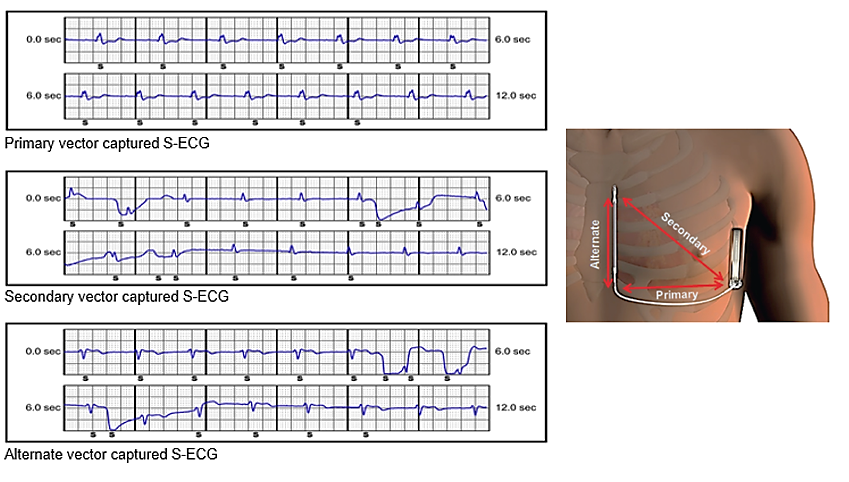 Figure 2 – Captured S-ECG sensing vectors with baseline wander present on the secondary and alternate vectors. To the right; image displaying the orientation of each vector. Turnage et al. US Cardiology Review 2018; 12(1): 66-70

What is the most likely cause of these recorded EGMs?

Answer
Air escaping from the header

At first glance the trace shows electrical activity which could be consistent with a ‘true’ ventricular arrhythmia. However, a closer inspection of the trace reveals an irregularity to the onset and offset of the episode and there is clear evidence of intrinsic R waves walking through the electrical rhythm. The intrinsic R wave rate ranges between 80-90 bpm which is the same ventricular rate before and after the recorded episode. The rhythm is therefore not ventricular tachycardia.

The electrical activity captured is rapid and of high frequency and of high amplitude ruling out myopotential artefact which is more typically seen with irregular low amplitude signals.

The signals seen are more consistent with oversensing electrical noise. Of the options remaining, it is unlikely the trace was caused by air surrounding the proximal sensing ring as the artefact is only present in the secondary and alternate vectors (the two vectors involving the tip electrode). This type of artefact also more commonly presents with low amplitude signals and baseline sway. Therefore, the most likely cause of this trace is air escaping from the header.

Air escaping the header is a rare but known cause of oversensing which can be seen in the first few days following S-ICD and transvenous ICD implants. One case report of an S-ICD described damage to the sealing plug as a reason for its occurrence, which can allow air or fluid to ingress into the connector block resulting in electrical noise oversensing and the risk of inappropriate ICD therapy (1) 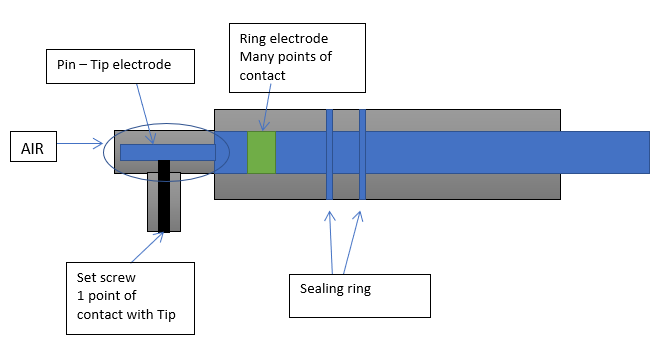 Figure 3 displays a diagram of the lead header showing how the connector block tapers down at the section where the lead tip is inserted. It is this area which can collect air or fluid. Due to the shape of the header, any trapped air can only exit via the set screw port. The set screw only has one port of contact with the lead pin. Therefore, when the air exits, it intermittently displaces the set screw from the lead pin causing a vibration artefact mimicking a ventricular arrhythmia.

As the lead tip is involved, only vectors using the lead tip are affected explaining why the primary vector (ring to can) showed no signs of artefact.

To prevent occurrence of air in the header causing oversensing correct set screw deployment is important, as is taking care not to damage the sealing plug. The operator should insert the torque wrench into the pre-slit depression of the seal plug before inserting the lead into the port. This helps releases any trapped fluid or air within the connector block and allows for the escape of such medium immediately on inserting the lead.

In this case we programmed the sensing vector to primary which showed no artefact and scheduled a check for 6 weeks post implant. At this check there were no further stored arrhythmia episodes recorded, postural and isometric manoeuvres were performed, and no artefact could be reproduced indicating that any air previously present in the header had now dispersed.