Morphology On
Onset On
Stability On

If All Indicate VT, deliver therapy 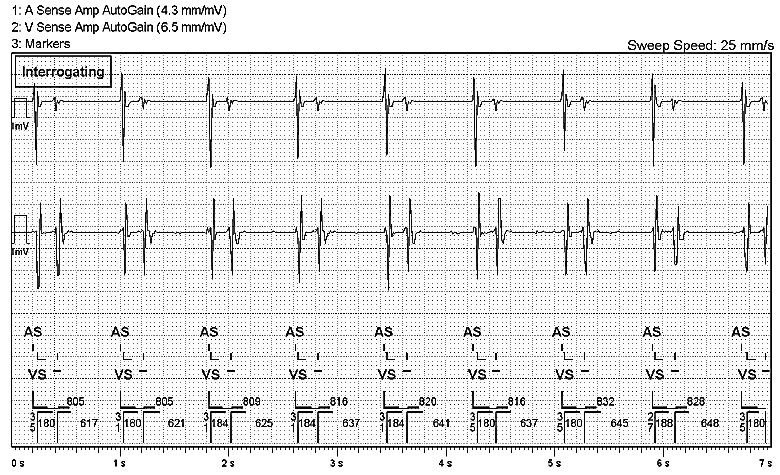 Which answer best explains the above EGM recording?

Explanation
The real-time EGM shows ventricular lead displacement.
The EGM shows a single sensed event on the atrial channel while the ventricular channel shows 2 sensed events. Every VS is followed by a subsequent sensed episode 180-188ms later that is represented with a -, indicating that the event is binned and does not count towards detecting a VT or VF episode. The Sensed AV interval is very short – varying between 27-35ms – and is non-physiological in duration and being indicative of a far field signal. Therefore, the ventricular lead is likely to have displaced and has migrated in-between the tricuspid valve allowing it to sense both atrial and ventricular activity.

This is different from pacemaker crosstalk which is when an atrial paced event is sensed on the ventricular channel, causing inhibition of ventricular pacing. This can be rectified by the use of ventricular safety pacing (VSP) which detects for the presence of crosstalk by monitoring for non-physiologic ventricular sensed events (e.g. an ApVs interval of less than 110ms on Medtronic devices) and responds by pacing the ventricle. 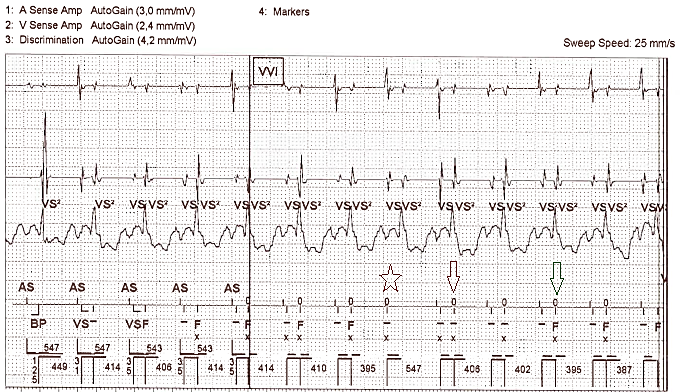 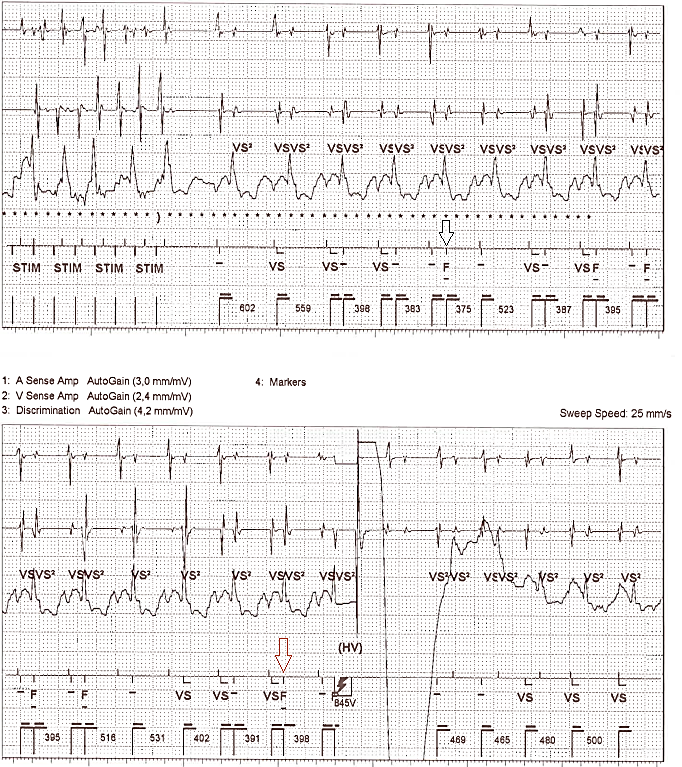 The above episode – amongst 5 other similar episodes – shows inappropriate therapy that has occurred due to the lead displacement. In the first EGM strip, the sinus node rate increases therefore this decreases the interval between the true ventricular activation and the “far-field” atrial activation on the ventricular lead. St Jude Medical high energy devices detect tachycardia episodes by comparing the current R-R interval to the average R-R interval, calculated by (sum of current interval + previous 3 intervals) / 4. If either the current or the average intervals is measured outside of the tachy detections zones (in this case, >375ms), that interval is discarded. We can see that every V-A interval on the RV channel is greater than 375ms, therefore these intervals are discarded as the current interval falls out of the tachy detection zones. However the A-V intervals (measured approximately 150-180ms) are binned in the VF zone as both the current and the average interval falls within the tachy detection zones.

At the ‘star’ marker, we see that while the atrial activation has been sensed on the ventricular lead, ventricular activation was not sensed. This results in the average interval rate for the next 4 events to be measured outside the tachy detection zones, therefore the intrinsic V activity will not be binned into either the VT-2 or VF treatment zones. From the second ‘arrow’ marker onwards, the average interval is now fast enough to fall into the detection zones, therefore binning of these events in the VF zone continues with the 8th event binned at the end of the 1st strip.

In the 2nd EGM strip, at the ‘arrow’ marker both the current and the average intervals are within the re-detection zones and binning in the VF zone commences again after ATP during charging. The sequence of events previously described continues onto the 3rd EGM strip until the 6th episode is binned in the VF zone is reached (denoted by the orange arrow), meaning VF has been redetected by the device and upon occurrence of the 7th event, HV therapy is delivered.

Upon arrival into A&E, tachy therapies were disabled and the patient was referred for an urgent CXR displayed in figure 3

Figure 3
X-ray performed in A&E on the left. Post implant X-ray on the right.

Twiddler’s Syndrome
Twiddler’s Syndrome occurs due to intentional or unintentional manipulation of the device pulse generator within the skin pocket by the patient. This manipulation causes coiling of the lead in the pocket and its dislodgement from its implanted position, resulting in failure of ventricular pacing and potential sensing abnormalities. The majority of cases are diagnosed within the first year of implant and has an estimated frequency of around 0.07-7% [1]. Manifestation of Twiddler’s Syndrome can vary and dependent on the displacement of the lead, can result in unintentional stimulation of the ipsilateral phrenic nerves or the brachial plexus [2]. Risk factors for the syndrome include obesity, elderly age; female gender, impaired cognition and a large sized device pocket relative to the size of the device generator [3].

Often patients will report a sudden return of their pre-implant symptoms (in cases where devices were implanted for symptomatic bradycardia and AV block), however in patients where devices were implanted for rarely occurring bradyarrhythmias or for prophylactic reasons, this may not be the case. Abnormal lead measurements such as a reduced sensing amplitude and high threshold or non-capture will be present at a device follow-up and a chest x-ray – performed to evaluate lead positioning – will show evidence of the lead coiling in the device pocket.

Treatment for cases of Twiddler’s Syndrome involves uncoiling and repositioning or replacement of the affected lead with repositioning of the pulse generator. Suture fixation of the device generator and the leads with a smaller device pocket without redundant space can prevent the occurrence of Twiddler’s Syndrome, however too small of a device pocket can be a predisposition to device erosion.
References: