What is the cause of this Mode Switch Episode?

A 56 year old male with a history of paroxysmal atrial fibrillation (AF) with poor rate control during AF episodes, sick sinus syndrome and an ejection fraction < 45%, was considered for an AV node ablation, with intention to implant a cardiac resynchronisation therapy pacemaker (CRT-P).  Initial implantation was in 2014, where a Biotronik Evia HF-T pulse generator was implanted. Active fixation leads were positioned to the right atrial appendage and right ventricular apical septum. An attempt at left ventricular (LV) lead placement was unsuccessful and the LV port was plugged.  Following implant and without undergoing an AV node ablation there was improvement in symptoms. The decision was made not to re-attempt LV lead implantation with the device programmed to function as a dual chamber pacemaker.  Since implant there has been normal pacing function. The RA threshold which was accepted as high during implant has remained high but stable.  All other lead measurements have been within normal limits. Episodes of mode switch have been seen on device interrogation as expected with a history of PAF.  However, one interesting EGM recorded as a mode switch episode is displayed below. 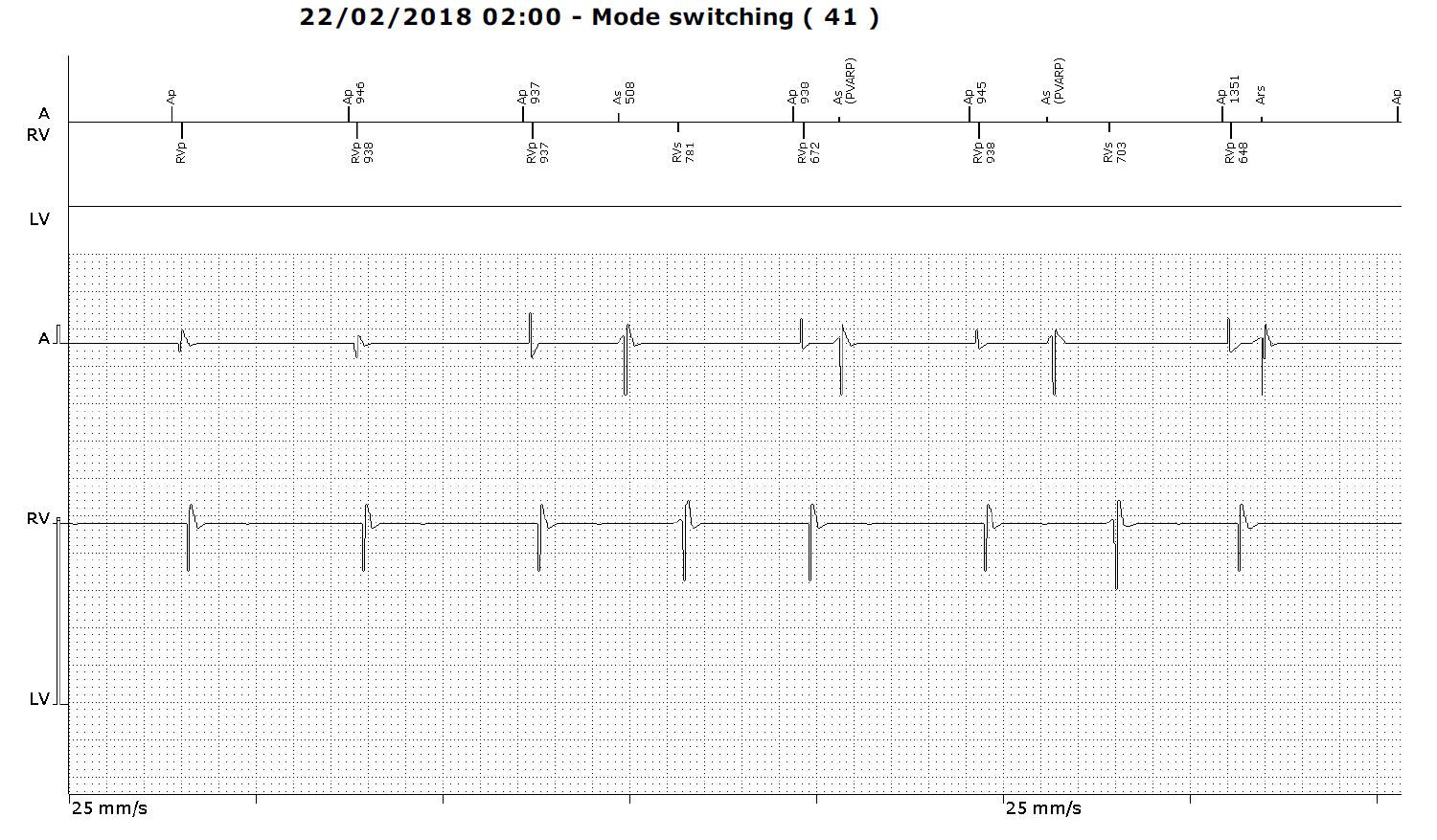 What does the electrogram show?

Explanation
Although recorded as an episode of mode switch the electrogram displayed shows an atrial capture control test occurring.  This is the reason for the shortened AVD during atrial pacing (AP) seen after AP markers.  At the 3rd AP marker there is loss of atrial capture which results in the next atrial event, an atrial sense (AS) marker (sinus activity) being conducted to the ventricle via the intrinsic conduction system.  This is aided by IRS plus / AV hysteresis algorithms remaining active after an AS event resulting in a long PR interval.  At times the intrinsic sinus activity falls in the post ventricular atrial refractory period (PVARP), these events do not trigger an AV delay timer but are counted as atrial events contributing to the mode switch criteria. All other options can be ruled out as the trace does not show atrial bigeminy or ventricular ectopy. There is no atrial oversensing present and dynamic AV delays would not display the short AV delay seen after AP markers at the pacing rate displayed. Overall this is normal device behaviour and subsequent assessment of the atrial lead confirmed a normal functioning atrial lead with atrial capture at a high but stable output.