What is the cause of symptoms in a patient with a single chamber ICD?

A 42-year old male implanted with a secondary prevention single chamber implantable cardiac defibrillator (ICD), (Medtronic Visia SR) attended for an in person ICD check to investigate symptoms described as palpitations and pulsating in the neck. Relevant device related history includes a recent admission involving multiple appropriate high voltage (HV) shocks for polymorphic ventricular tachycardia (PVT) degenerating to ventricular fibrillation (VF). Episodes of PVT were initiated by ventricular ectopy. Management at the time included the introduction of antiarrhythmic medication and programming of the lower rate limit (LRL) to 80 bpm to suppress ectopic activity which was reduced to 60 bpm pre discharge. Prior to device interrogation a 12-lead electrocardiogram (ECG) was recorded, displayed in figure 1. Device settings are detailed below.

Figure 1. ECG recorded prior to device interrogation. Beats of interest are labelled 1-10. 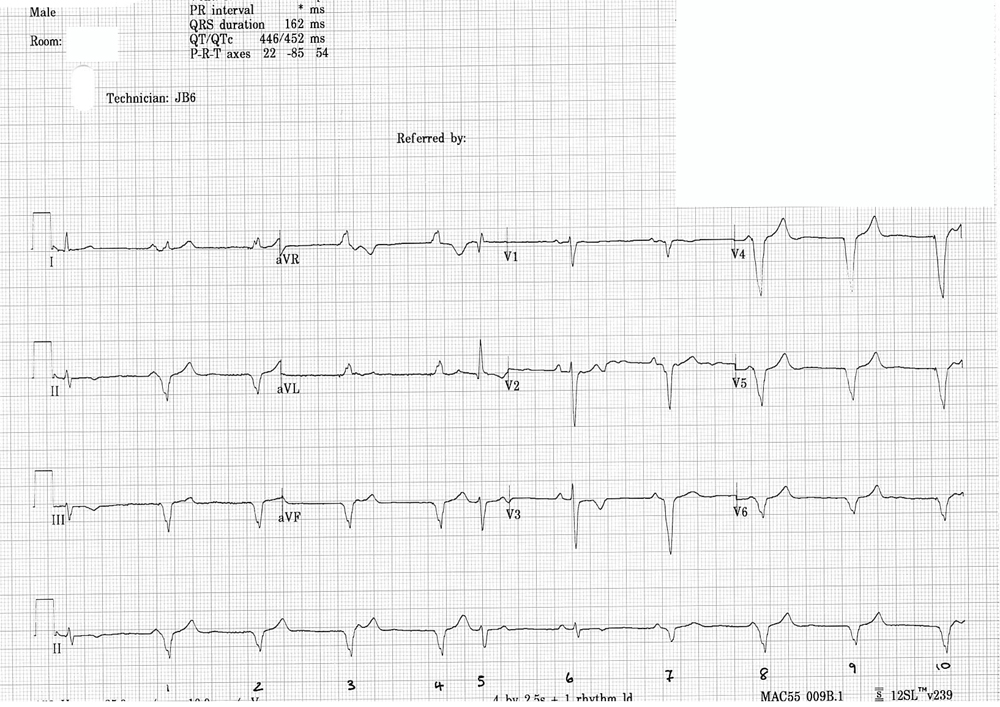 From the 12-lead ECG what is the likely cause of symptoms?

The ECG shows predominantly a ventricular paced rhythm with signs of competing intrinsic sinus rhythm. There are various QRS morphologies throughout this ECG, and it appears that the ventricular paced rate is similar to the sinus rate seen when P waves are seen.

The first 4 complexes are ventricular paced beats, QRS complexes are broad with an inferior axis at a rate of 60 bpm (the LRL) with subtle pacing artefacts best seen in ECG lead aVL for beats 3 and 4.
Of interest assessing lead II the QRS and T waves have slightly different morphologies. Beat 1 has a possible P wave preceding, almost on time with the QRS and the T wave in beat 3 has a slight irregularity indicating that there could be a P wave hidden within it.

Beat 5 is narrower than the paced beats and occurs early. This could be an ectopic beat possibly junctional as it is not particularly broad or could equally be an aberrantly conducted beat from a conducted sinus P wave hidden within the T wave, which happens to fall at a time where conduction through the AV node is possible.

Complex 6 is preceded by a P wave and has a narrow QRS, and therefore appears to be an intrinsic sinus beat. Complex 7 is also preceded by a P wave, however this appears broader than complex 6, but not as wide as complex 1, leading to the presumption that this is a fusion beat (a fusion of intrinsic and paced complexes).

Complexes 8-10 are broader ventricular pacing complexes. Complex 8 is similar to complex 1 and likely to fall on time with an intrinsic P wave.

If we measure the sinus rate and the VP rate these are similar at around about 60 bpm. With competing rate this creates a loss of AV synchrony. P waves not always seen and hidden within the QRS/T wave create a condition where the atrium is being depolarised (atrial systole) at the same time as ventricular pacing is triggering ventricular systole. Ventricular pacing against a closed valve is creating symptoms often described as pacemaker syndrome.

In this case, to avoid patient symptoms the LRL was firstly reduced to 50 bpm. Following this, the patient remained symptomatic and a further reduction in the LRL was initiated to 40 bpm. With the LRL set to 40 bpm there was an improvement in symptoms. In addition, the ventricular pacing percentage was also found to improve from 70% to 43%.

Pacemaker Syndrome (PMS) represents the clinical consequences of suboptimal atrioventricular (AV) synchrony or AV asynchrony, regardless of the pacing mode. This is classed as an iatrogenic disease; a consequence of medical treatment (Ellenbogen et al. 1997). What this patient was describing (pulsating in the neck) is consistent with the symptoms associated with ‘Cannon A waves’. When the atria contracts against a closed tricuspid valve (i.e on ventricular contraction), the pressure increases within the superior veins. By programming the LRL below 50 bpm, we can reduce the occurrence of competition between intrinsic and paced rhythms, reducing symptoms of PMS. A more invasive step in prevention of PMS is for an atrial lead to be implanted, which would resolve the issue of AV asynchrony in this patient’s case and therefore hope to resolve all symptoms. However, unnecessary harm can be avoided by appropriate programming.